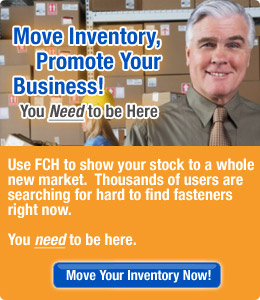 "We do 4 uploads to different sites, and the FCH Sourcing Network upload is by far the easiest because of the direct link to INxSQL. "
Lance Archer
Global Supply

A brief history of how the FCH Scrubber was born, and how it is used thousands of times each day to solve problems relating to identifying fasteners.

Editor's note: FCH Scrubber Technology is software that performs a variety of fastener inventory data functions, such as cleansing, commodity identification and part number matching. A version of the software is also used by the FCH Search Engine. Businesses in need of data formatting and cleansing for ERP setup or shopping cart system implementation should contact FCH to discuss how The Scrubber can simplify and shorten project duration while greatly reducing overall expense.

The Scrubber is nearly as old as FCH itself. Of all the work we did in 2006 preparing to launch FastenersClearingHouse.com as an on-line fastener sourcing network, we never thought we would need anything like The Scrubber.